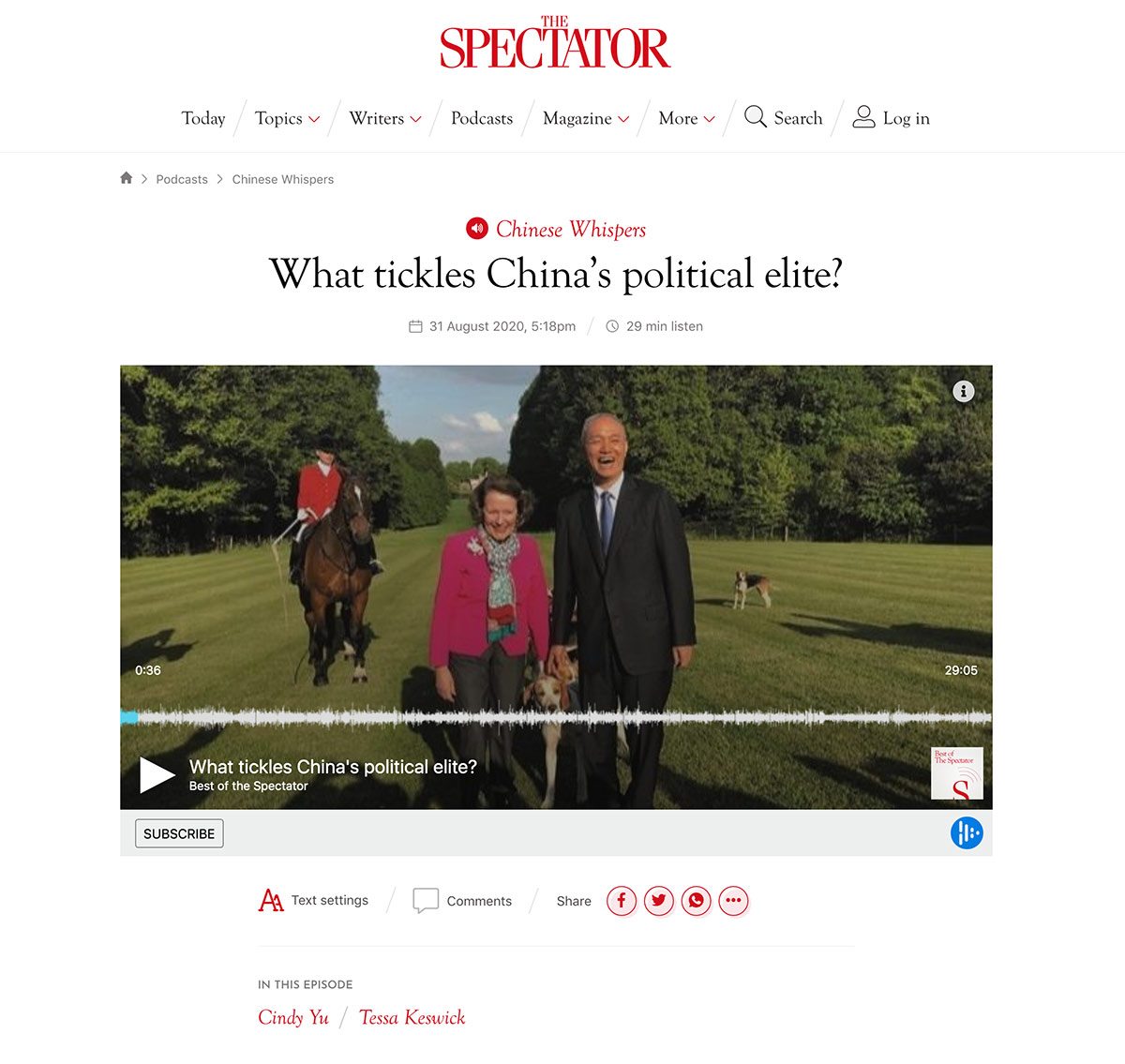 A Spectator Podcast with Cindy Yu

‘You can’t get far doing serious business in China without having friends in powerful places. So when her husband’s company, Jardine Matheson (which once upon a time had smuggled opium into the country), was invited back into a liberalising China in the 1990s, Tessa Keswick had rare access to the country’s top leadership. On the podcast, she recounts seeing Bo Xilai, the disgraced Chongqing party secretary, days before he was arrested by Xi Jinping; the prank that Zhu Rongji, the then Prime Minister, played on Henry Keswick; and what it was like inside Zhongnanhai, the secretive Beijing compound that China’s leaders work from.’

Listen to the Podcast

‘WE NEED TO UNDERSTAND CHINA. THIS BOOK IS A GOOD PLACE TO START.’

Part history, part social history, part gossip and part travelogue, her book is in the mode of the late Sir Patrick Leigh Fermor. It sheds more light on the cultural and social history that animates the Chinese mindset, gives them their self-reliance, their sense of determination and ability to outwit the obstacles placed in their paths, than a reader could reasonably have hoped for. Tessa Keswick’s conclusion is that “the delicacy and refinement inherent in the best of Chinese culture is not matched by its Western equivalent”. 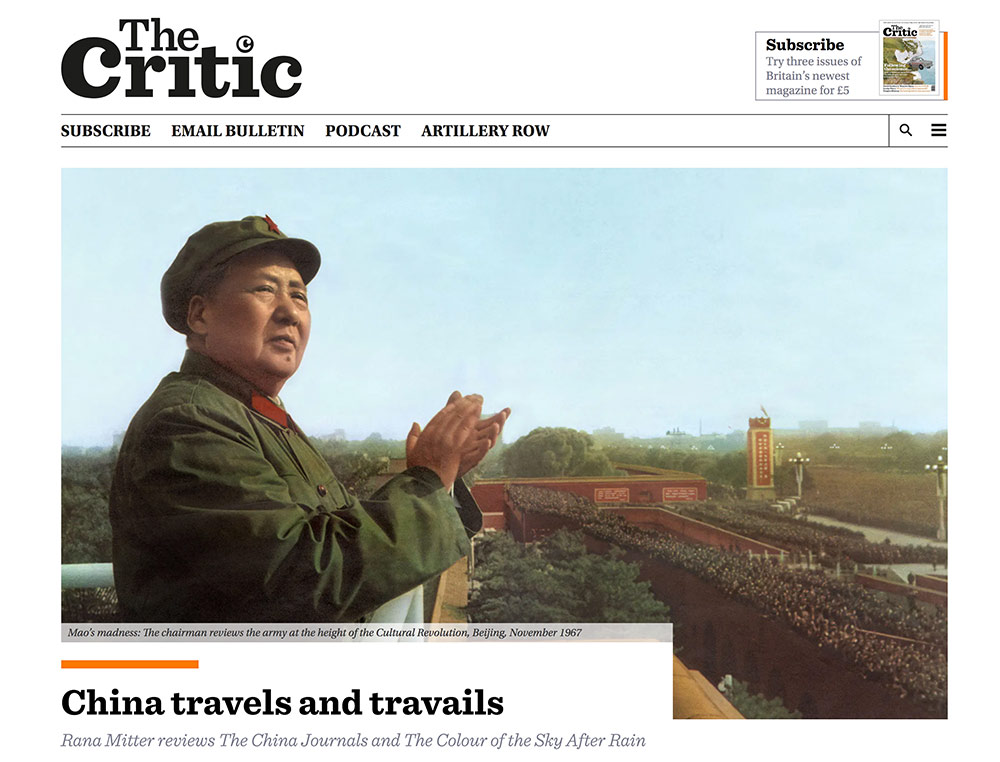 ‘Her witty account shows that today’s China has respect for many aspects of British life, including its business instincts and education.’

‘This book made me want at once to leap on a plane with Tessa and friends and travel to Zhongdian, to Jiayuguan, to Suzhou, to Xinjiang, and on and on. I learnt a great deal about China over the millennia and especially over the last fifty years. I glimpsed some of the great sights and had the impression of meeting some of the astonishing range of people described. The story of Jardines anchored in reality the great ideological shifts of the political hierarchies and of the economic transformation of the whole country. The account of her final meeting with Bo Xilai was almost unbearable.’

‘This book opens up a whole different world. The pictures are magnificent, a vision of different colours and lives… Follow a delighted traveller, Tessa Keswick, as she explores and learns about China, starting in the 1980s. She reveals her engagement and her enchantment, feelings that many who visit China share. China is a complicated place with a complicated history. Tessa’s first visit in the 1980s saw a China struggling into an unfamiliar wider world, attempting to alleviate the overwhelming poverty of the majority of its citizens. This is an important phase of China’s past to remember and revisit. Those who visit and revisit China have to adapt to a completely different society and develop the friendships, relationships and contacts that make their visits possible and even fruitful. The Keswick family has had a long and often privileged route through which to build these relationships. That history is a fascinating aspect of the story, one that all those who work with China, at whatever level will recognise. All societies are built with relationships. China has its own system of relationships which we cannot ignore.’

‘If you want an enthralling read about China and to learn a lot about that extraordinary country at the same time, read Tessa Keswick’s The Colour of the Sky after Rain. I derived so much pleasure and excitement from the story that I hardly noticed all the history I was imbibing. The Colour of the Sky after Rain is both serious and seriously entertaining. It is strongly recommended.’

‘At precisely the time that we need to understand China more than ever, along comes a book that is incisive, honest, witty, and beautifully written which explains the Chinese people and society to a Western audience superbly. Impossible to categorize, The Colour of the Sky After Rain is part-memoir, part-travelogue, part-history, part-thoughtful musing, and packed with insights into the Chinese state and soul that forces us to look afresh at the world’s thrusting new superpower.’

‘Keswick is an engaging, lively guide and she is at her best when writing about the Chinese landscape.’

Tessa Keswick insists many in the West, even many in influential positions, do not know China at all.

The retired British top policy adviser, therefore, has made it her mission to address some of these, often cultural, misunderstandings in her highly engaging new book, The Colour of the Sky After Rain, about her own nearly 40-year love affair with the country.’

‘Tessa Keswick has just brought out a book about her travels in China and her development of Chinese friendships over 40 years (The Colour of the Sky after Rain). Tessa has been my friend for most of that time, as has her husband Henry, who bought this paper in the 1970s, appointed Alexander Chancellor as its editor, and thus set it on the path to success. So at first I thought that I shouldn’t comment on the book. I changed my mind, however, when I noticed a reluctance to review it — perhaps because Henry is very rich (he recently stepped down from running Jardine Matheson, the Far East conglomerate, after nearly half a century), and because Tessa, who made some of her trips through contacts made as his wife, is therefore seen as not properly qualified. In reality, these are not objections, but advantages. Henry’s money and connections got Tessa to interesting places with interesting people. Her own commitment, and the fact that she was a woman with leisure in what was almost wholly a man’s world of business, gave her the gift of time — living with a Chinese family to learn Mandarin, for example — which most visitors lack. Tessa’s travels begin with a country so poor that lorry drivers rarely switch on their lights in the dark, thinking it saved petrol, and end with the stupefyingly rich superpower of today. The book is honest. Tessa loves China, and is persuasive about the virtues of its people — their directness and their honesty once trust is achieved. But she does not shy away from the grimness of a political order which remains adamantly opposed to basic human freedom. One of the most powerful passages comes when she and Henry meet Bo Xilai, the rising star of Chinese politics, on the day before his public disgrace — his ‘utterly mournful’ eyes, and the ‘exceptionally tall men in dark suits’ who suddenly surround him. The book is also Tessa’s gesture of love for Henry. She wrote it, without telling him, when both of them were very ill. Henry was born in Shanghai, where his father traded, but driven out by the Japanese and later kept out by the communists. This book celebrates, obliquely, how he has won so much back.’ 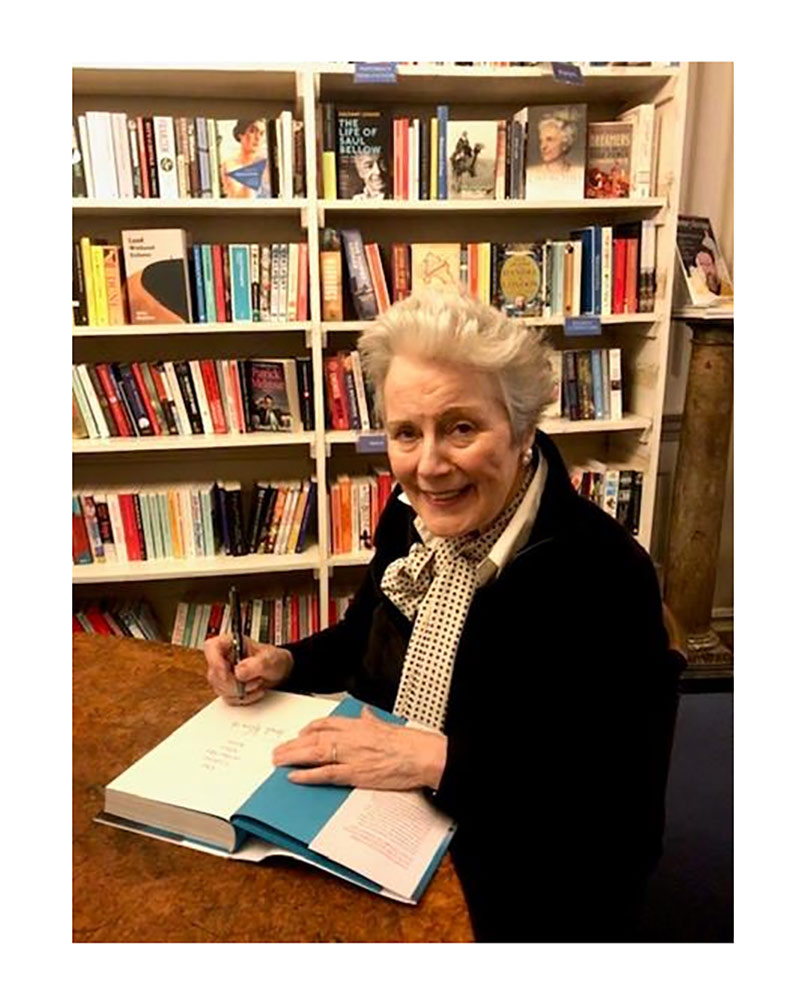 ‘Tessa Keswick, who first visited China in 1982, has written an exceptional memoir, ‘The Colour of the Sky After Rain’. It is a portrait of a changing China, exploring its depths, its people and its culture over the span of forty years.

Part travelogue, part economic and political history, it is anchored by personal photographs and anecdotes which are studded throughout. A force to be reckoned with, it reveals the dynamism and heart that propelled Keswick onwards.

Anyone with any interest in China should read this book.’

‘The Colour of the Sky After Rain’ was featured as one of the FT’s ‘Books of the Week’.

‘I promised to read more of Tessa Keswick’s book about her travels round China, The Colour of the Sky after Rain, on my flight to Lisbon today. It’s an intensely romantic and personal account of her love affair with China which she has explored both intensively and extensively after her marriage in 1985 to Henry, the great taipan and my chairman of trustees at the National Portrait Gallery.’

‘We each bought a copy of the book – The Colour of the Sky after Rain by Tessa Keswick – which is most fascinating. The author has been visiting China for 40 years and has witnessed its remarkable transformation. She has been to regions so remote even very few locals have set foot in them, and she can understand that Chinese mindset and reveal its secrets to us.’

Excerpt taken from the article by Mary Killen, published in The Lady. 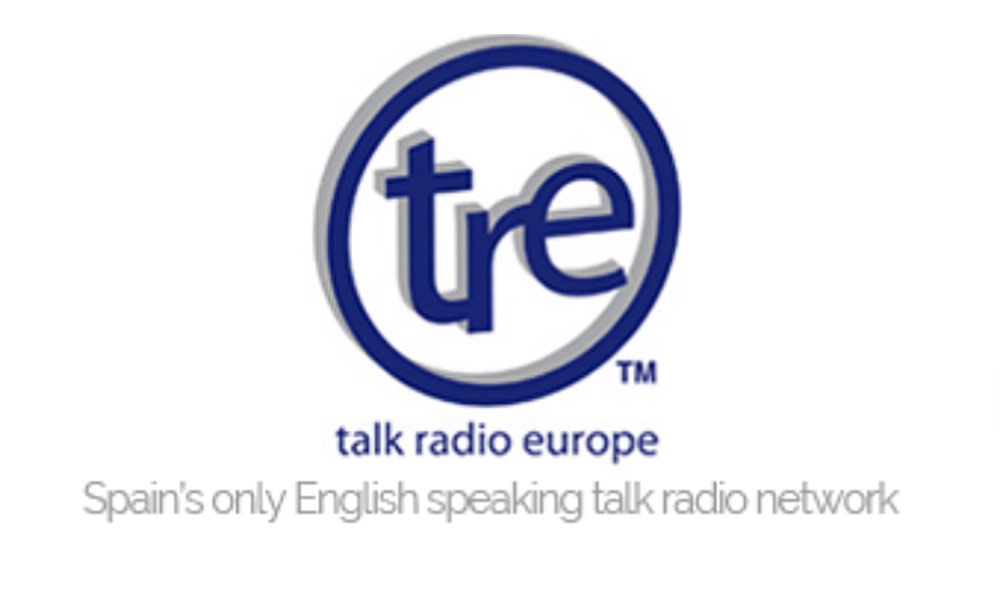 Tessa met with Ger Sweeney at Talk Radio Europe to discuss her recently published book, The Colour of the Sky After Rain.

Listen to the Interview 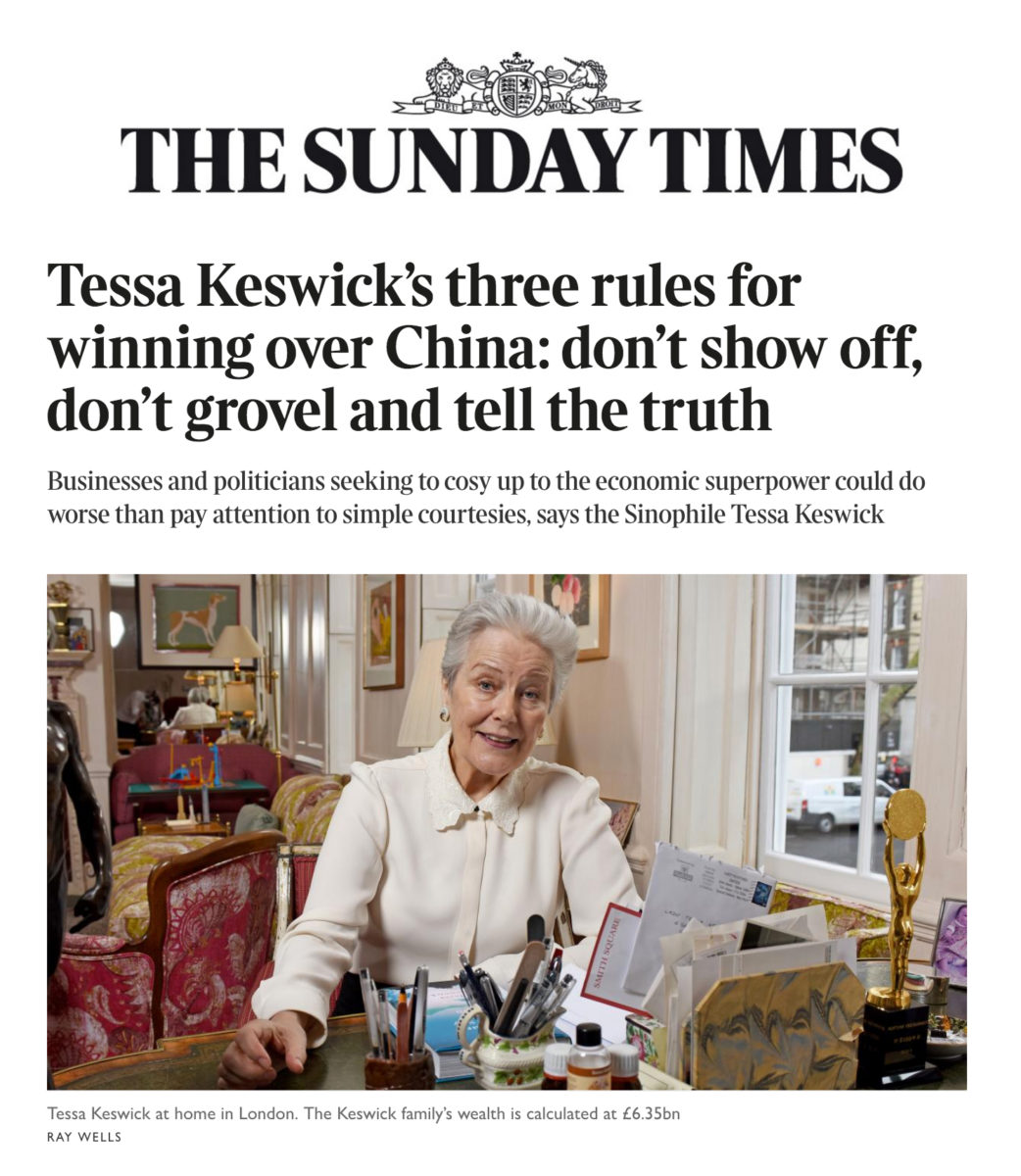 ‘When Tessa Keswick first visited China in 1982, working for an investment company looking for opportunities in the newly open country, business meetings were dispiriting affairs. “Everyone was wearing cloth caps and sitting there like this,” she says, hunching her body. “They were all complete Communists and everything was dark and miserable.”

Yet returning in 1997, with her husband, Henry Keswick — then chairman of Jardine Matheson, the Hong-Kong based conglomerate that was built on the lucrative opium trade and today has £49bn of assets, including the Mandarin Oriental hotel group — the situation was transformed.’

Tessa Keswick reflects on her experiences in China in a fascinating memoir. She recalls visiting towns that were pitifully dilapidated throughout the 1980s. One of her travelling companion had the contents of his suitcase eaten by rats. She also reveals helpful nuggets on how to behave when doing business.’ 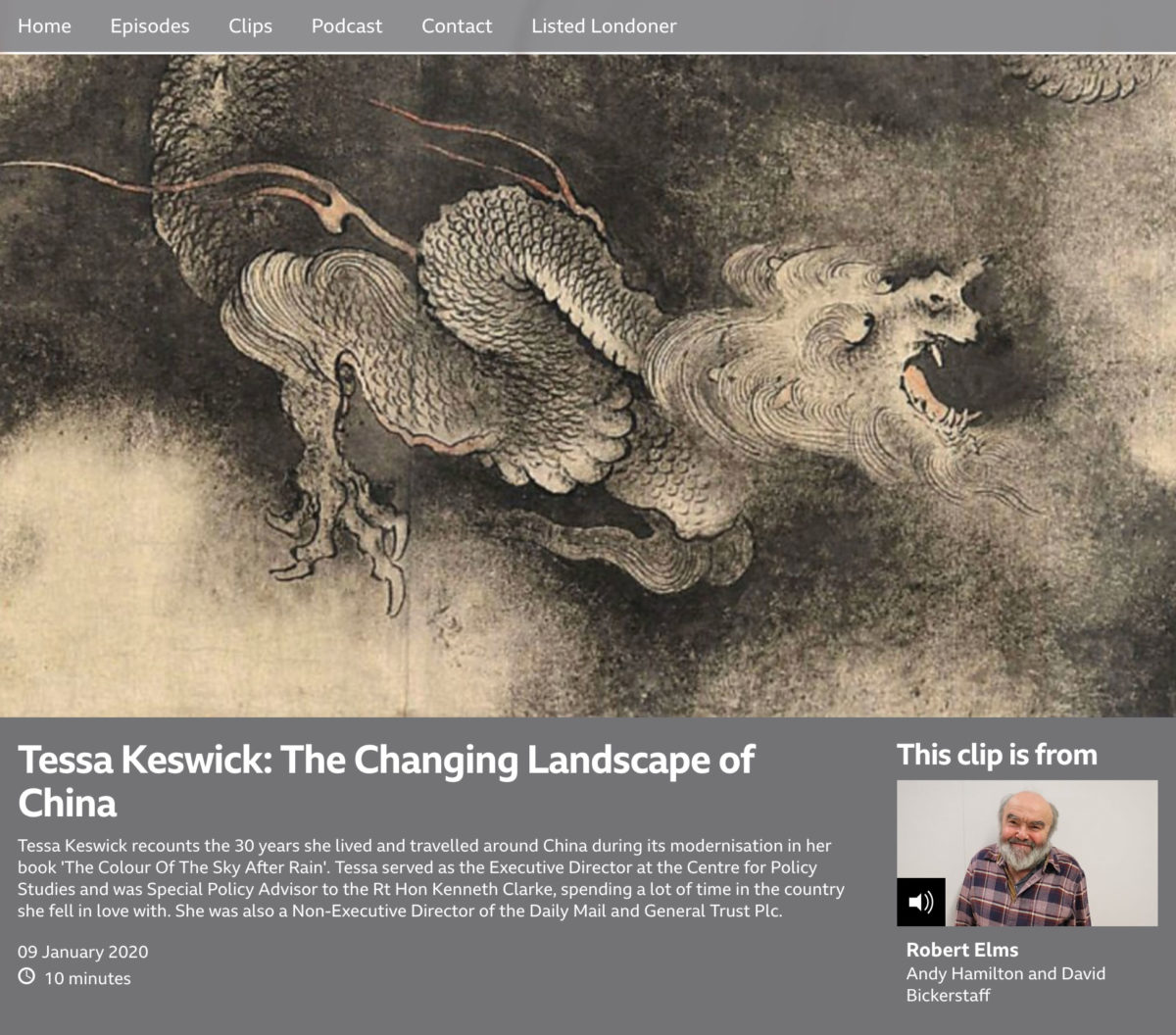 ‘Tessa Keswick recounts the 30 years she lived and travelled around China during its modernisation in her book ‘The Colour Of The Sky After Rain’.

Listen to the Broadcast

‘Tessa Keswick is an extraordinary person and she has written an exceptional memoir.

Last night she launched The Colour of the Sky After Rain (Head of Zeus, £30) and the book kept me up way past my bedtime. Tessa is a force to be reckoned with. This hugely rewarding book tells the story of not only her deep relationship with China over forty years but also reveals the dynamism and heart that have propelled her onwards. Part travelogue, part economic and political history, it is studded with personal photographs and anecdotes. It reads so well that I found putting it down was not an option. This does not happen very often.

Anyone with ANY INTEREST IN CHINA AT ALL should – I mean MUST – read this book.

You can order a signed copy (or more than one) by emailing andrew@heywoodhill.com or purchase online here.’

The Colour of the Sky
After Rain